Back to all posts

Millennials, What Drives Their Brand Loyalty and Purchasing Decisions?

Millennials. What makes them tick? More importantly, what makes them buy your wares? Since Millennials wield massive purchasing power it’s worth knowing the answers to these questions, so we asked them as well as collating other surveys to give you some insights.

Firstly, What is a Millennial?

It’s a loose term that can refer to anyone born as early as the mid-1970’s to as late as the early 2000’s but it generally refers to people born or growing up in the two decades leading up to the turn of the millennium. So basically everyone now in their 20’s and 30’s. Whilst they may not have the spending power of the previous generation, they are the movers and shakers and drive or influence spending habits. They are the ones buying houses, having kids and spending all the money on what you need to do those things.

Millennials tend to be the most techno-savvy generation with the use of smartphones, computers and other similar devices nearing saturation point. Interestingly, 47% of Millennials admitted that the Internet is among those things that they could not live without. Millennials are more likely to shop, communicate and even find a partner via digital means than their older or younger counterparts.

In terms of character and values, Millennials tend to be more liberal and altruistically orientated, you’re more likely to find them supporting same-sex marriages and environmental issues for example. These traits can be leveraged by brands to build a strong relationship with the demographic early in their lives in a long and hopefully fruitful partnership for both parties after all the buying power of the Millenium generation is projected to reach $1.4T by 2020. 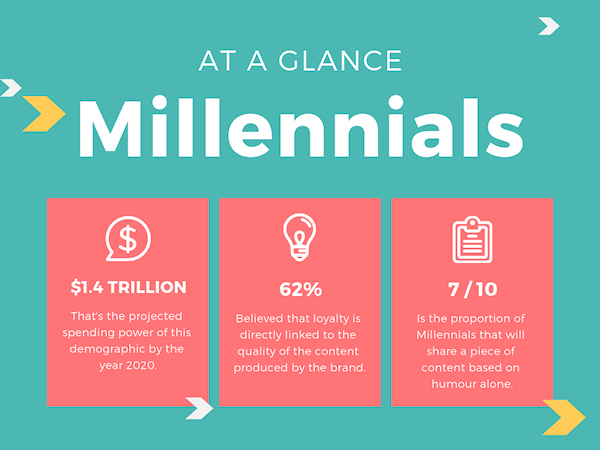 One of the biggest takeaways from the studies is that 62% of Millennials believed that brand loyalty was directly linked to the quality of the content that brand produced and we suggest that of the 38% that didn’t see the link, a good proportion are unknowingly influenced.

They also expect to see the product in use or instructions, tips and tricks on getting the most out of it. In fact, 64% of Millennials respond more positively when useful content is shared by brands and only 32% of them believe that communication with the brands is currently helpful.  So basically entertain or inform Millennials for free (but make sure that your content is not too long as 41% of Millennials tend to abandon long content) and you have a friend for life or until you offend or annoy them anyway, but we’ll get to that later.

31% of Millennials declared that they were more likely to buy from brands that get their content right.

A further 69% were found to link recognition to loyalty, which is fairly standard as we’re all more likely to trust a brand we’ve heard of before but the main point is that useful content is a surefire way to become recognized and therefore a trusted entity. So Millennials are much more likely to show loyalty to a brand because of their great content. 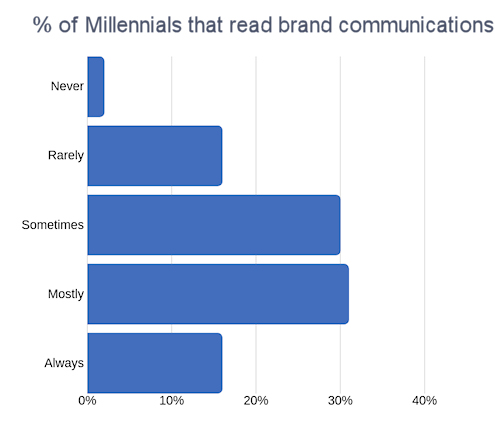 “The Millenials we spoke to were wary of traditional advertising with 84% of them expressing a significant mistrust in brands that market aggressively and heavily push calls to action (CTA’s).”

Instead, Millennials are more likely to trust brands and information sources that are not actively focused on selling.

Laughter is the Best Medicine

The very best way to spread the word online is via humor with 7 out of 10 in the study group willing to share items if they are funny enough. Of course, humor might not work for all industries but we’ve all seen various memes and viral videos doing the rounds like the “Will it Blend?” campaign or the one of Jean-Claude Van Damme demonstrating the stability of Volvo’s new dynamic steering, these things get legs of their own and as they’re passed around for their comedic value with the branded message slipping under our subconscious’s radar and doing its job. Interesting, informative or ones sympathetic to a cause often get shared too like these about garbage disposal rates and GDP comparisons for various countries and others that are just plain interesting like this history of the world infographic.

The Millenials we spoke to were wary of traditional advertising with 84% of them expressing a significant mistrust in brands that market aggressively and heavily push calls to action (CTA’s). Millennials place sales and advertising at the bottom of their trust rankings and they put faith in information sources that are not actively focused on selling messages.

When you ask a representative cross-section of Millennials to rate different sources of brand information on a scale of 1-5 in terms of the trustworthiness, they rated their closest friends as 4’s but conventional advertising scored just 2.2. On top of that, 26% of Millennials said that they are likely to prefer brands their friends use.

The way to a millennial’s heart is to be useful without expecting anything in return then custom can be freely given. In reality, there is very little difference between this approach and the traditional one but everyone is complicit so it works. Millennials just don’t like being told what to do.

Take care not to choose the wrong subject. In their increasing need to push the boundaries to be noticed, a significant minority of brands have stepped over the mark and a couple can no longer see the mark. Hell hath no fury like a Millennial scorned, so it’s wise to steer clear of the obvious flashpoints but it’s often getting near the taboos that makes the item remarkable, it’s a fine line and it’s getting finer. 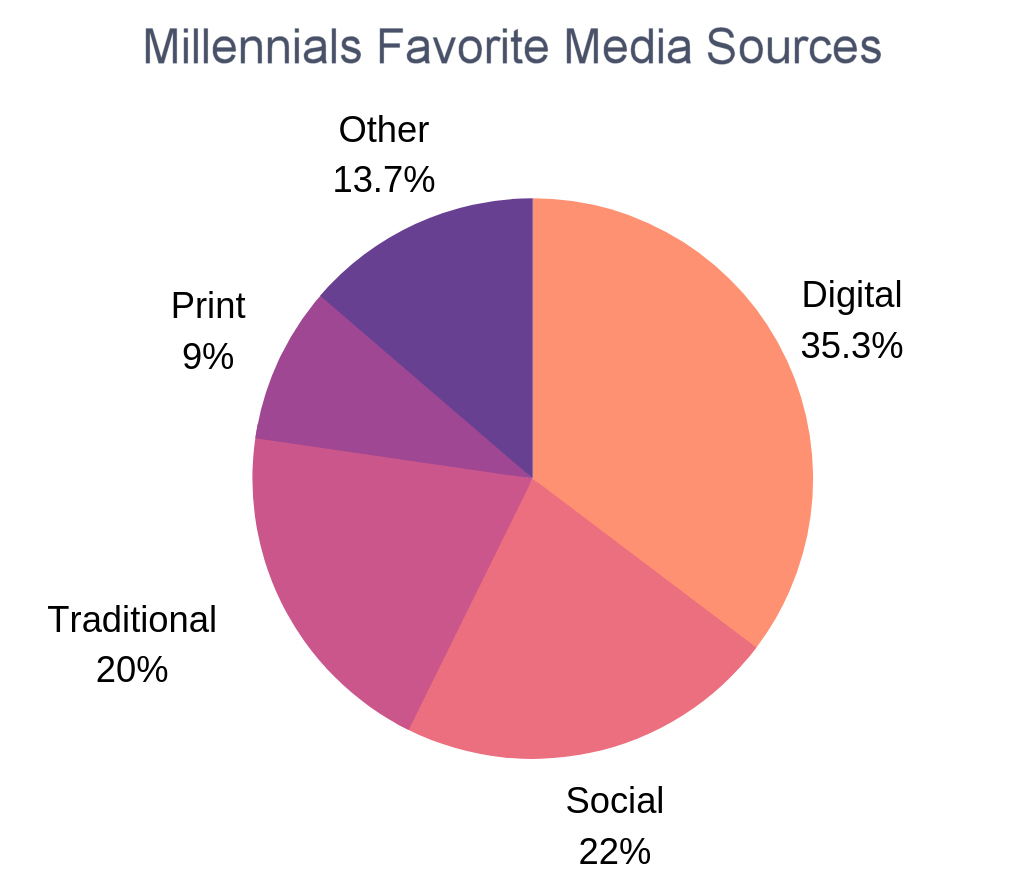 Take McDonald's for example, dead parent? Have a Fillet-o-Fish, that’ll sort it. That ad had to be pulled in the UK, with many subjects you can sail close to the wind but grief is a fairly universal no-no. Of course, smaller firms won’t get noticed quite as much if they faux pas but they also have less chance of riding the wave. They do say “no publicity is bad publicity” but that sentiment comes from way before any Millennials were around and let’s not get started on the generation that follows.

The same thing can be extrapolated into real-world situations, the average Millennial is so used to being given things for free online that they can’t help expecting it all the time. Give them a laugh or an offer on a swing tag attached to your product. Sharing is the crux of this approach and admittedly you can’t share a single tag with your friends but you could share a discount code or a QR code that anyone could scan with a smartphone.

People are used to passing things round online but they also like to have something tangible in their hands and a printed piece of card certainly fits that bill.